skip to main | skip to sidebar

Newspaper Wrapper from Norway to US New Jersey March 1902

This is a multi object, i.e. an object with many features: In the postal sense, it is a newspaper wrapper. Considering the little advertisement in the upper left corner, I would classify it as a private wrapper. The advertisement also leads me to believe that the content of the wrapper was the Nordic Philatelic Monthly (Nordisk Filatelistisk Tidskrift) published by the Philatelic Societies in Stockholm, Christiania (today Oslo, the capital of Norway) and Copenhagen in common. Editorship was taken in turns by the clubs. At the time, March 1902, it had just passed to Sweden, which is very likely the reason why certain info has been crossed out.

The Editor, Henrik Dethloff and his staff, situated in Christiania, posted the wrapper on March 2rd, 1902. In choosing the newspaper wrapper category the sender opted for the cheapest possible rate, the printed matter rate. However, to make sure, that it would reach its destination the Editor chose to send it sent registered. This in itself is quite a rare combination. Printed matter normally indicates a sample of mass production of little value. 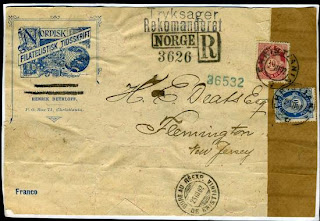 The rate 60 + 10 = 70 øre, consisted of 20 øre for registration and 50 øre that is 5 øre pr 50 gr for printed matter to (Europe and) the United States. The wrapper + content must have weighed 500 gr or half a kilo. Knowing that the individual copies of the monthly were not terribly heavy my guess is that at least 5 samples if not more were shipped by the same wrapper.

It was sent to Hiram E. Deats, who was one of the great philatelic writers and collectors of revenue stamps and of New Jersey history. He was also President of the New Jersey Library Association; the library in Flemington N.J. is named after him. He was editor of An Historical Reference List of the Revenue Stamps of the United States in 1898, which is still one of the most important books extant on U.S. revenue stamps. A truly great and important Philatelist.

Deats was also a dealer. He was one-half of Deats and Sterling. About 1895, the U.S. government announced that they were emptying their archives and were going to burn it all as waste paper. Deats and Sterling bought Ten Railroad Boxcars full of paper, paying the equivalent of about $40,000 in today's money: Many thousands of stamps, proofs, essays, and covers, plus important correspondence. They and 8 helpers then spent the next two years going through and organizing it all. The book he edited was the result, and the income from selling the material to collectors over time. To this day, U.S. revenue collectors should bow at the very mention of his name.
The reference book he edited, which is usually called The Boston Book, is available on line here:
http://books.google.com/books?id=Eq0pAAAAYAAJ&printsec=frontcover&dq=revenue+stamps#v=onepage&q=&f=false

One issue I have not yet been able to clarify: The mark in French language which says “Bureau au réexpedition de Kristiania”.

The info on Hiram E. Deats and his work is the result of research kindly made by my friend Bart from N.Y.

A very welcome anonymous comment explain the use of the postmark “Bureau au réexpedition de Kristiania”. Take a look: http://www.nrgx.com/categories.php?cat_id=112&page=2
Posted by Svend at 05:02

Very interesting. I look forward to reading over your past blog entries.

I am in fact thankful to the owner of this website who has shared this enormous piece of writing at at this place.

Hi friends, how is the whole thing, and what you
would like to say concerning this piece of writing, in my view its in fact amazing in support
of me.

Only, that could be directed at the small kids, to make available freedom from varied types of diseases.
MAPS not just treats children in distress with delicate care but refers to the
anguish and anxiety of each parent getting through a child under chronic condition. Some of the other common drinks children consume include fruit juice, cordials
and soft drink.

Amazing! This blog looks just like my old one! It's on a entirely different subject but it
has pretty much the same layout and design. Wonderful choice of colors!

Very good post. I certainly appreciate this site. Keep it up!

I'm gone to tell my little brother, that he
should also go to see this blog on regular basis to take updated from hottest information.

Heya i am for the first time here. I found this board and I find It really useful & it helped me
out much. I hope to give something back and
help others like you helped me.

Svend
Stamp collector since I was 6 years old. Keen to promote contacts between collectors and also philately as such. Your can find me on Facebook. I manage several groups all about stamps. Do contact me there if you care to discuss stamp collecting or other philatelic subjects.

www.easy-hit-counter.com
My blog has recently been added to Hobby Blogs, which is part of one of the largest networks of blog directories on the Web. Please visit my blog's personal page to vote for my blog and comment to other blog users.